How Not to Let a “Star” Run You Ragged

What should be done before firing a troublesome, yet useful employee

A Murphy’s law: nearly every team includes a person who is like a nail in the shoe for the manager. The employee can spread around negativity, doubting the future of the company publicly and loudly or break the universally accepted rules, encouraging his or her colleagues to do the same with his or her behaviour or even instigate strife and hatred. Richard Branson advises to “hire slowly, but fire quickly”: the most mistakes regarding the staff are made on the stage of selection of personnel, but these mistakes must be corrected as soon as possible. However, if the employee is of great value or even irreplaceable, he or she cannot be fired right away. What to do not to fire the “troubled kid” and not being trapped by his or her bad character?

Do not postpone the problem

Of course, it would be perfect if you knew all the advantages and disadvantages of the employee beforehand and tried to protect the staff from his or her bad traits. “You need to know the candidate’s personality before hiring him or her, understand what post he or she needs, how and with whom he or she will interact before he or she has started, - says the business coach Alan Nelson, - and create the necessary conditions.” However, in reality, this turns out to be not so easy: the most obnoxious person can pretend to be an angel in the job interview, besides, the personality can change in time. If the problem arises, the earlier you interfere, the better, because the staff adapts to the troubled employee and in a month there can be problems not only with him or her but with the rest of the colleagues. Most often people with difficult personalities don’t understand that they are the root of the problem; it seems to them that people around react strangely to their actions. At the same time, most managers unconsciously wish to get past the problem - no one wants to get involved in an open conflict. However, this is a dead end - such an “abscess” will burst sooner or later.

Try to understand the reason for the employee’s behaviour

The curious reminder on how to treat the troubled employees placed on the San Francisco archiepiscopacy website pays a great attention to understanding this problem. What drives an employee who behaves differently from what you expect? Hardly will you resolve the problem without understanding this. The Catholic church can be trusted on this issue - in the end, it is the oldest corporation in the world. Check if your idea of the root of the problem is relevant. For example, it may seem that your subordinate who is constantly being rude to his or her colleagues is a notorious sadist. But in fact, the probability of that you are a sadist is three times higher: Washington State Department of Labor. & Industries found out that in 72% cases born sadists become managers, not their subordinates. And your employee’s sadism is probably the part of the whole atmosphere of emotional abuse which has been created by you. The best way to assess the problem is to talk to the “troubled kid’s” colleagues. Opinions of other people are an indicator which can show the objective picture that the person may not understand,” - explains the coach Kathleen Harper.

You are a manager and surely understand the importance of planning. If you are going to resolve the problem during a private talk, prepare for the talk with a troubled employee by outlining the main clauses of it. Judy Ringer, the founder of the training company Power & Presence Training points out the list of clauses which the manager must clear before arranging a talk with the employee. What goal do you hope to achieve? What are the employee’s motives to behave like this and not that? What emotional “leverage” does he or she usually use in communication with you? Can you cope with your emotions during the talk? To what extent is the employee aware of the problem? What are his or her hopes and fears? And what are your fears?

Work on the employee’ behaviour, not personality

Don’t get personal: your problem is the employee’s negative behaviour, but not he himself or she herself. If you have made a decision to keep him or her, you must try to “disable” his or her actions that harm the workflow. Sometimes such a behaviour can be reversed by your or his or her colleagues’ actions. For example,  it is often enough to move the person spreading negativity around to a separate room and plan his or her schedule so that he or she has less time to communicate with the colleagues.

Rhonda Scharf who has been the president of the Canadian Association of Professional Speakers for several years advises that you should finish the dialogue with the same idea that has been stated in the beginning. If your interlocutor manages to add some important assessments and remarks, this is a sign that you haven’t reached your goal. At the same time you need to listen closely to the employee - probably, you will learn something that you haven’t known before and be able to see the situation from his or her perspective. In any case, he or she should feel that he or she is understood. Don’t accuse openly,  demonstrate objectivity. Try to learn as much as possible about the employee’s problems - choose questions in such a way that he or she cannot give one-word answers. Don’t interrupt, but summarize aloud from time to time what has been said: “So, you are telling that…” 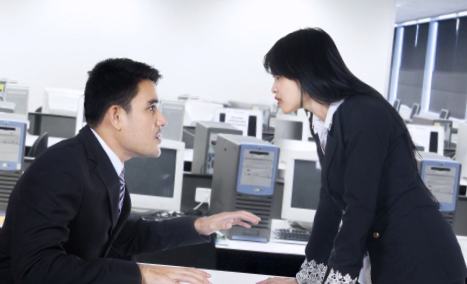 Find out if the employee has the reasons to behave negatively

However, all stated above is true only when you feel that you are the right one, not your subordinate. It can happen that you will understand towards the end of the talk that the root of the problem is not his or her bad personality, but the really existing problem among the staff, probably created with your own wrong decisions. The employee may be displeased with his or her own position and functions - in this case, to keep him or her, you should offer him or her some prospects. “Once I read that the employee who is displeased with the work has simply crossed the borders of his or her competency. And to make him or her efficient again, you need to expand these borders,” - says the businessman Benjamin Riley.

Don’t hesitate to remind of agreements

If you have reached some agreements by the end of the talk, don’t hesitate to check constantly if they are fulfilled. For example, if the  “troubled kid” promised never to be late again, remind him or her of it each time he or she is late. The promise has a certain weight even for the most irresponsible person. Having realized that you constantly show him or her up for breaking his or her own promises, the employee may feel embarrassed and do it less often at least.

If the result didn’t satisfy you, it’s time to part

However valuable your “star kid” is, you cannot adapt to him or her completely. Sooner or later he or she will understand that he or she can order you about as he or she pleases and then nothing will stop him or her. It is better to prevent it and part with this employee with your head held high. No matter if it looks like your managerial failure, probably, it was unavoidable due to objective reasons. In the end, your business may be too small for the employee. In their early career, such legendary people as Michael Bloomberg, Steve Jobs, Thomas Edison and Walt Disney went through being fired. The names of the managers who fired them are long forgotten and that’s a pity: they literally changed the history with their wise decision.