“An Iron Lady” or “an Elder Sister”: All About Women-Directors

A woman at the head of the company is no surprise in the modern world. But what are women-directors like? GR describes them in details.

The main difference between the man’s and the woman’s style of management is emotional sensitivity. A managerial position makes a man a dry old stick, stone-tough, rejecting doubts, sympathy and excessive worries. It is not the same for a woman. She takes everything personally and then cannot sleep at night, worrying about her business.

Even making important decisions, a woman trusts her emotions and follows her famous feminine logic. As strange as it may seem, it works in most of the cases and becomes a base for success.

A woman-director also trusts her emotions when hiring a new employee. She can even ignore the absence of the candidate’s necessary professional skills and hire him or her just because he or she is “a good person”.

Managing the staff, a woman pays more attention to the relations between the employees. If someone has a problem, she can not only support and empathize with the person but also cry together with him of her. Then she will wipe her tears and go on ruling the process.

A woman can switch between her roles easily – here she is the head, here – a friend and a moment later she is a wife and a mother. However, the third part of women’s nervous disorders is caused by the collision of these roles.

By the way, a woman’s ambition to get to the heights of the corporate ladder directly depends upon her family life. If she is a happy wife and mother, she doesn’t care about leadership. Quite the reverse, a single woman seeks to ensure her own stability, confidence in the future, feels an urgent need to fulfill her wishes and capabilities. 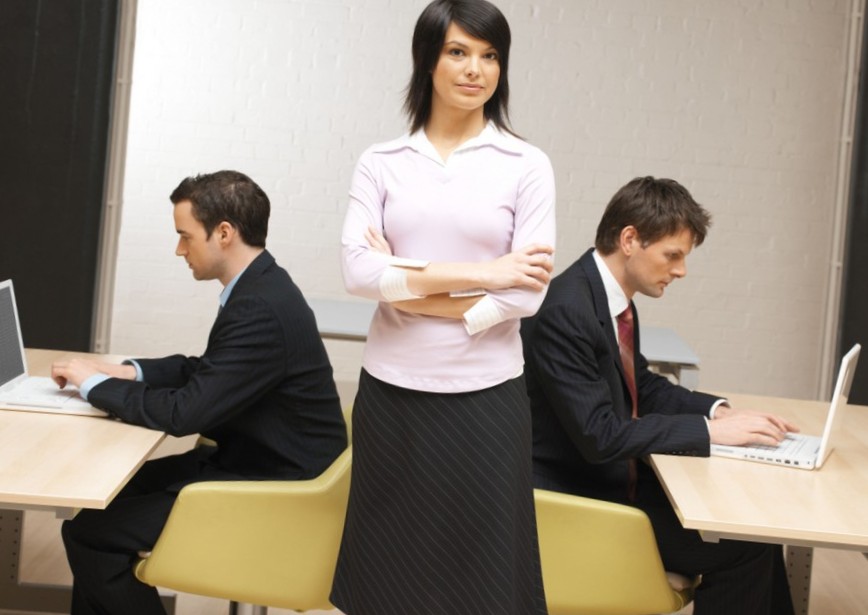 A woman is more patient than a man. She is ready to proceed gradually, with every step getting her closer to the planned goal; she doesn’t need a momentary result, she knows where she is going to. This appears to be more beneficial in difficult economic conditions. She pays more attention to trifles and doesn’t consider it necessary to reject little propositions, small orders and possibly profitable offers. That means a woman never misses anything.

In extreme situations a woman doesn’t go the path of fear and avoiding the problem, but the one of active opposition. Using different models of behavior, a woman finds optimal solutions for the situation. Lesser ambitions and unwillingness to achieve the goal at any cost let a woman act more effectively than a man in difficult circumstances.

A woman’s leadership style is more democratic, she is always ready to collaboration and collegial decision-making. She appreciates when all tasks are divided clearly between her subordinates and controls fulfillment of these tasks on different stages regularly.

Regarding relations with partners, a woman’s leadership style is defined by more flexibility, the ability to adapt to the circumstances. A woman never complains of lack of opportunities to reach the goal, never dwells on finger-pointing. This approach gives a woman an opportunity to act successfully within the given restrictions and press forward to the planned goal persistently and gradually.

By the way, the opinion that women are more conflicting than men is just a myth. Yes, they are eager to shout, complain, but no more than men. However, women are very forgiving, they burst out with their emotions and then calm down quickly.

An "iron lady" and an "elder sister"

Women-directors are conditionally divided into two extremely opposite types:  an “iron lady” and an “elder sister”. The first one is cold, authoritarian, self-confident, aware of her power and abilities. She has mastered backdoor methods of influencing the staff and competitors and believes discussions and exchange of ideas to be ineffective and relies only on herself. She is strict and demanding to her subordinates, relies on punishment in the motivation system, expects discipline and compliance from her staff and appreciates their professional skills.

An “elder sister” relies on collective forms of decision-making and encourages discussions and dispute. Being an outstanding person, she wants the people working with her to be strong as well. She is benevolent to her subordinates, but expects total endeavor and appreciates a sense of unity in her team.

Not only professional but also moral and psychological qualities of the employees are important for an “elder sister”. She doesn’t accept intrigues, promotes openness and constructive criticism. Regarding the motivation system, she relies on rewards there, encourages innovations and a creative approach.

It was a psychologists’ idea to divide all women-directors into types. However very often a woman takes something from an “iron lady” and something from an “elder sister”, as it is obvious that we are completely unpredictable. Though that is the point.