Keystroke recorder is a system which has been established to detect words which have been entered on the keyboard. The amazing thing is that the actions are recorded without the user knowing that his/her actions are being monitored. The best system that is available for this task is the one which is offered by Spyrix Personal Monitor. The system is the best and very efficient. This is because the system has been advanced in terms of functionality. Thus, if you are planning to acquire monitoring recorder the best system are offered by Spyrix. Any system that you acquire from Spyrix has been tested and proven to work as per expectation. 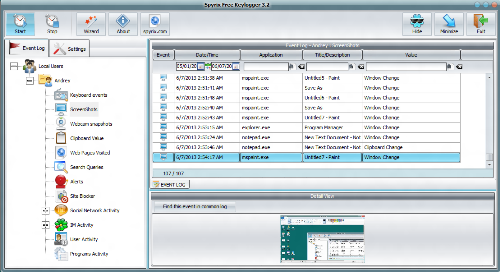 Free keylogger is very useful. This is because it helps one to know what was typed, site opened and who typed it. Therefore, this system is very handy when conducting investigations to determine whether employees are wasting time on social sites. If a lot of time has been wasted on internet, browsing sites which has been prohibited one is able to know. The system is amazing as it produces a report of when the activity was recorded and the accurate amount of time spent on a site. The system functions independently without human control. Every operation of the system is automated hence high efficiency in recording activities particularly the words which have been entered on the key board.

Keystroke recorder can be employed in many sectors under different functions. In business sector the system is used to monitor employees who are using computers in performing the prescribed duties and activities. In this case when an employee deviates from what has been assigned the system detects and automatically produces a report based on login and time spent. This is particularly when the employee spends a lot of time doing things which are not corresponding to the line of duty such as browsing sites presumed to be a waste time. Therefore, with this system performance is enhanced as employees are monitored without supervision.

In security sector keystroke recorder is essential when internet or computer crime has been committed in a given organization. This includes; unauthorized access and leaking of information. The system makes investigation to be easier and faster without consumption of too much time. The system has the capability to detect and produce passwords which have been used, the time of the activity, application used and by who. Therefore, solving of crimes which have been committed using computer is thus easier and less complicated in comparison to the past.

What make keystroke recorder system from Spyrix to be perfect is that it is flexible in all activities. This is because one has the choice to monitor activities of choice. On top of this all the monitoring goes undetectable and users have no knowledge as to whether they are being monitored. Further more, the system is easier to install in a computer and to link with computers whose activities are to be monitored. Therefore, one thus receives regular monitoring reports via email where local network is used.