The Cost of a Mistake: 4 Signs of a Sham Leader

A sham leader can be more charismatic and charming than the true one, but he or she will cost your company dear

Once I hired a bright charismatic leader for the post of the top-manager. I was sure that I made a brilliant choice, but unfortunately, I mistook the sham leader for the true one. He was carried away with selling his achievements, told about his success, deals and negotiations as about facts already happened. As a result, we missed a number of business opportunities and lost several tenders since his preparation was very shallow. Castles in the air that the sham leader built but never planned to implement led to the fact that we had to repair cracked relationships with our clients who were displeased with idle talks. Later we realized who is before us, but by that time the team had already lost their trust in the very post taken by the sham leader in the company.

This experience allowed me to define the precise difference between a true and a sham leader, realize how dear such a mistake can cost and build the understanding of how to prevent sham leaders from getting into the team. In my opinion, a leader is a person who knowingly spends his or her energy for the benefit of the company; his or her interest in people, events grows with the life experience, but not decreases. The ability to tell a sham leader from a true one is important: the outer difference is almost imperceptible, but the cost of the mistake can be high. The main decoy of a sham leader is that he will probably be even more charismatic, charming and appealing than a true leader. Nevertheless, such people have a number of characteristics which give them away on closer inspection.

Personal ambitions are more important than the result

First of all, sham leaders are not really ready to take responsibility. They do not aim for success; they are driven by their big ambitions. What’s interesting, such people are sure that they can handle everything. They irradiate with this confidence very often without any evil intent and inspire natural trust in people around.

Constant work over own image

A true leader doesn’t need to maintain his or her charisma deliberately, it is essential. A sham one will always, consciously or unconsciously, focus on his or her own positioning, creating a desirable impression on other people, uttering his or her accomplishments. At the same time, such leaders will have different goals. A true leader will pursue creative ones, a sham one will aim at the personal benefit. 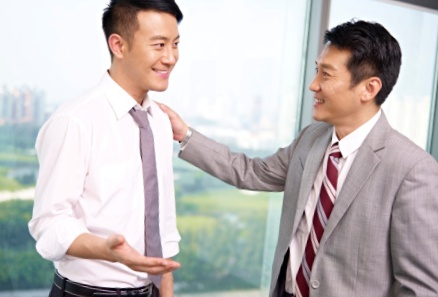 Sham and true leaders use their energy differently as well. A true leader will allocate his or her energy, taking care of its supply. As his or her goal is a long-term one, he or she will have to keep it through a long period of time, giving it away a lot and often. A sham leader’s process of energy consumption and saving is aimed primarily at him- or herself. He sets a goal to get what he or she wants with minimum physical and mental strain and will not spend anything extra.

A sham leader has no considered systematic approach to solving work tasks. He needs to be a loudspeaker, press for success and feel his or her importance. He is not aimed at the result, so he or she will not give enough attention to such things as control, delegation, description of the systematic approach and its introduction. However, he or she will always feign vigorous activity.

Quite the reverse, a true leader aspires to keep important operational tasks in the field of his or her attention as his or her strategic goal is to achieve the result together with the team and the process for the sake of the process is not regarded in his or her system of values. Often leaders don’t like to go into details, but a true leader will try to create a system where competent people are responsible for every field of work. It is important for him or her to be sure that the system works and the company moves from one common goal to another. It is the ability to lead a coordinated team that a true leader will focus on.  A sham leader will be more concerned about the outer side of the process and its PR-component.

How to avoid the mistake?

There are methods of interviewing which allow determining leadership qualities. First of all, these are pre-prepared open questions asking for numbers and examples. It is worth spending time and getting deeper and later collecting recommendations that prove what the person told during the interview. It is important to remember that the recommendations need to be given not by the people the person named during the interview, but by independent ones. Analyze the candidate’s professional experience from the point of his or her specific achievements, successfully fulfilled projects, built systems of cooperation in the teams he or she managed. All this information will tell you more about the person than his or her ability to present himself or herself effectively. Spend time and effort to minimize your risks. The main point is to avoid being captivated at once but to follow your business instinct and check all the provided information carefully.